Healthy and sustainable nutrition are at the heart of a project from non-profit enterprise DGA (Dürener Gesellschaft für Arbeitsförderung) under the heading: “Düren. Healthy. Active.” Among other things, this modern gastronomy concept entails a canteen, in which thousands of meals can be prepared and cooked, ready for delivery. The meals are made up of fresh seasonal products from the region, according to the latest standards. The aim is to supply kindergartens, the Düren hospital, the Rurtal workshops and employees of the DGA. As a next step, even more kindergartens, schools and additional customers could be supplied.

Of course, the Biofruit company also adheres to the wish for healthy, regional and sustainable nutrition. “We are very happy to support this forward-looking and exciting project,”says Biofruit Managing Director Dirk Salentin. The rapidly expanding Biofruit company is regarded as a competent and knowledgeable specialist in handling organic fruit and vegetables and their placement in the trade. Biofruit stands for guaranteed highest quality, reliable logistics and sustainable food production. 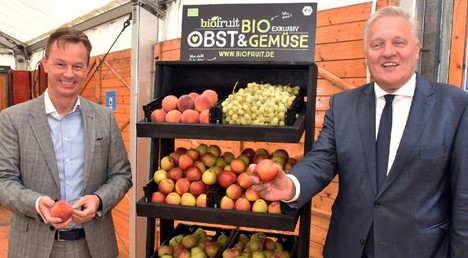 Sustainability in the foreground
The model project pays a lot of attention to sustainability. According to DGA supervisory board chairman, District Administrator Wolfgang Spelthahn, this can also be attributed to Biofruit: “Thank you for supporting this project so generously and energetically as a regional company”. DIrectly addressing Dirk Salentin, he said: “After all, you are the one who ensures that thousands of people eat healthy food.”

The model project is to be built on the site of the former glassworks in Düren. In addition to the canteen, a “glass kitchen” is planned here as well, where children, for example, can cook for themselves and take a look at the modern canteen kitchen. “Nowadays, children in particular often no longer know where the food comes from and how it is processed,” says Astrid Küpper, Managing Director of DGA.

In the new canteen, which should become a reality in about two years, the initial aim is to prepare around 4,000 dishes a day, but the capacity can be increased to up to 10,000 dishes a day. Eventually, the clientele will be expanded, if possible.

Model hydrogen region
The idea of sustainability and climate protection is important. The food is prepared and stored in an energy-efficient and resource-saving way before electric cars are brought to the customer. “The district of Düren is a model hydrogen region,” said the District Administrator. In the future, green hydrogen would be produced in the district of Düren, which would not only power cars, but could also be used as an energy source in the kitchen and other buildings. The project “Düren. Healthy. Active” project will also create jobs, not only for the new manager Mathias Steigers, but also for other catering and kitchen staff.

Further details are now being worked out as part of a feasibility study. “We are now going into further planning with great commitment,” explains the District Administrator – so that from the year after next at the latest, the abbreviation DGA will be used not only for Dürener Gesellschaft für Arbeitsförderung, but also for “Düren. Active. Healthy”.